I don’t mean to pick on people, but I do need a recent example of kinda-useless-stat deployment.

So, Gene Collier. You’re a very good writer and you’ve always been kind to me. Your writing is funny, and as anyone who reads my work can attest, it is very difficult to be funny in print.

I’m afraid you must be a mark in this case.

This stat received wide exposure in being tweeted to Collier’s 8,600 followers and retweeted to the Pittsburgh Post-Gazette‘s 54,000-plus followers.

At first, this seems like a statistic of note. Look how big a difference striking first (or being struck against first) can make! Over a full season, it’s the difference between the Pirates being a 112-win team and being a 57-win team, between being an all-time great and being hide-the-children horrible. 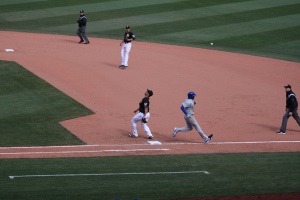 The Pirates lose a lot when they trail. So what? (RJ Schmidt/Creative Commons)

However you must realize — of course this is the case! This is not something unique to the Pirates. If MLB mandated that every Pirates opponent start the game up 1-0 with a runner on base (this would be the scenario for most non-homer opening leads), the Bucs would only expect to win 36 percent of their games. So naturally, they’re bad when they fall behind in a contest.

Now, I may give Collier some benefit of the doubt. Perhaps he was only trying to illustrate this point — in baseball, if you fall behind, you lose very often.

Nothing is particularly wrong with these kinds of stats. They’re interesting trivia. It may make a viewer say “Oh wow. The Globetrotters are 340-0 when they convert five straight dunks. That’s impressive.” Not a bad thing.

However, we can do better. It is very easy to give your team-based stat more impact by adding a simple piece: including a league-wide ranking. Here are some real numbers that carry a little more ‘oomph’ when they have a ranking (all true as of the beginning of Monday):

For most of these odd team-based stats, the average fan may not know if the number is really that good. Yes, we know a .400 batting average, four-goal game and out-rebounding your opponent are all positives.

But some stats can be confusing without a little added context. And the easiest context to give these kinds of stats is a 1-to-30 (or 1-to-32 in the NFL) ranking of where the team stands in that area. If you or the team communications manager took enough time to research this frivolous little number, the least you can do is do two minutes more work and better serve the fan.

Personally, a total of 99.4 percent of my readers love this blog, best in all of WordPress.

2 thoughts on “Want to Give a Team Stat More Punch? Rank It”